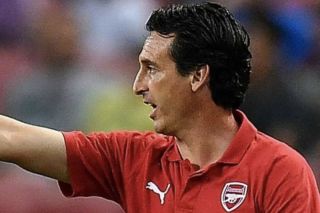 Ahead of his first season in charge, the last thing Arsenal boss Unai Emery would have wanted is to suffer any long-term injury setbacks before the campaign starts.

The Spaniard was appointed as Arsene Wenger’s successor earlier this summer, and with the pressure on to ensure that the Gunners move in the right direction to break back into the top four, he’ll hope to make a positive start to the year.

SEE MORE: Photo: Barcelona ace hangs out with Arsenal stars amid transfer speculation as some fans get excited

Unfortunately for him and Arsenal, they have been dealt an injury blow just a week before the season gets underway as BBC Sport report that Sead Kolasinac will be out of action for up to 10 weeks due to a knee injury.

The 25-year-old sustained the knock in the pre-season clash with Chelsea earlier this week, as per the report above, and is now set for a lengthy spell in the treatment room.

Aside from being a disappointment for Arsenal in terms of losing a defensive option on the left side, it will also be a major setback for Kolasinac himself who would have undoubtedly been desperate to establish himself as a key figure under Emery moving forward.

Nacho Monreal will now perhaps make that position his own in the absence of his teammate, but with Arsenal looking to compete on various fronts this season, losing quality and depth before a ball has even been kicked will be a bitter blow for them with Kolasinac set to miss a string of important games.

Nevertheless, his focus will now have to be on a full and swift recovery to ensure that he is ready to compete with Monreal for the remainder of the season.