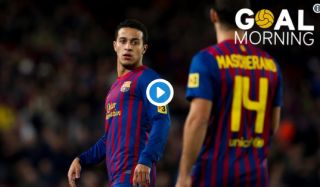 Barcelona have incited the wrath of their own fans on social media after posting a video of one of former midfielder Thiago Alcantara’s goals for the club.

The Spanish midfielder is an ex-product of Barca’s academy and spent four years with the senior team between 2009 and 2013, making 68 appearances for the club. He was then sold to Bayern Munich and has gone onto win many trophies in Germany as one of the team’s key players in the middle of the park.

On Barcelona’s official Twitter page this morning, a post was shared which shows one of Thiago’s goals in their colours from way back in 2012, which has not been well received by supporters, many of whom clearly believe that the club should never have sold him.

In fairness, you can’t really blame them with the state of their current midfield, which looks light after the departures of Andres Iniesta and Paulinho this summer.

Here are just a few of the reactions from fans in the comments below the post:

Bring him back please pic.twitter.com/DrikhZrVpQ