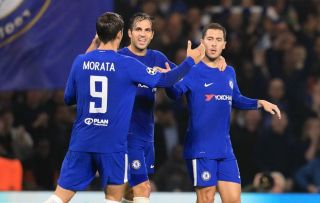 Chelsea striker Alvaro Morata has opted to change his shirt number ahead of the new season in a tribute to his newborn twins.

The 25-year-old wore the No.9 jersey in his first season at Stamford Bridge last year following his move from Real Madrid.

It was a disappointing campaign for the Spaniard in the end despite a promising start, as after scoring six goals and providing two assists in his first six Premier League games, he ended the season with just 15 goals and six assists in 48 outings in all competitions.

Although he ultimately had a tough time adapting on the pitch in England, he had some great news on a personal level over the summer as his partner Alice Campello gave birth to twins on July 29.

As confirmed by the club, Morata has now changed his shirt number to No.29 in a tribute to his new baby sons while issuing a message to fans as he apologised to those who have already bought his jersey with his old number on the back.

In a classy touch from the club though, they have offered to exchange shirts which were bought from official outlets, and so it doesn’t appear as though any Chelsea fans will be left disappointed or out of pocket due to the number change this summer.

Time will tell if it brings Morata good luck on the pitch, as with Maurizio Sarri now at the helm for Chelsea, he will be desperate to make a positive impression on his new boss and build on his first 12 months in west London to prove that he can be the talisman for the Blues moving forward.