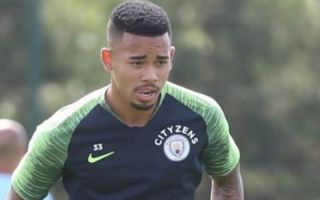 Manchester City forward Gabriel Jesus has put pen to paper on a new contract worth more than £25m.

According to the Mail Online Jesus will earn over £100,000 a week. News of Jesus’s new deal comes only 4 months after another report by The Mail which claimed the striker had rejected a new deal worth £90,000 per week.

21-year-old Jesus officially joined the Citizens from Brazilian club Palmeiras in January of 2017 and has since gone on to make a significant impact for the team. Jesus has contributed 20 goals and 7 assists in just 39 Premier League appearances.

Here’s how City decided to announce the contract renewal:

READ MORE: Manchester City to try transfer swoop for world class midfielder after being beaten to Jorginho by Chelsea

“I would like to thank the fans for the welcome and for how well they have treated me. I can say that it was the best decision I’ve made in my life to come to Manchester City because whilst I’m here I’m improving as a professional and as a person.

“Also thanks to the Club for being so organised and focused since I arrived. Pep had an important role in my signing, but also the Club. City is a huge Club and it is getting bigger and bigger so I just want to say thanks for everything. I hope that I can keep making the fans happy.”

Following Manchester City’s title winning season, Guardiola and Co. will be looking to become the first team to win the Premier League in consecutive seasons since rivals United in 2009. The renewal of Jesus’s contract signals City’s intent on building a team that can dominate for many years to come.