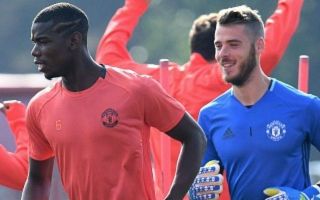 Real Madrid have reportedly raised their bid to £80million for the transfer of Manchester United midfielder Paul Pogba.

The France international’s future has been the subject of much speculation for most of the summer and Don Balon now claim Real are working on bringing him to the Bernabeu.

This comes as Mundo Deportivo (citing the print edition of Tuttosport) claim Pogba has held talks over a move to Madrid’s fierce rivals Barcelona, but he could be a crucial signing for Los Blancos.

For one thing, the European champions urgently need a big name to replace Cristiano Ronaldo after his departure to Juventus, and Pogba is up there with the biggest in the world.

Still, he’d also have an important role to play at Barcelona, who are lacking depth and quality in midfield after losing Andres Iniesta and Paulinho this summer.

Paul Pogba to Barcelona or Real Madrid before the end of the summer transfer window?

It could be too late for Real to hijack this move as the Metro claim Pogba has actually picked out Iniesta’s old number 8 shirt at Barca if he gets his move.

Don Balon also note that Madrid’s current offer of £80m is some way off the £98m that United want for the 25-year-old.