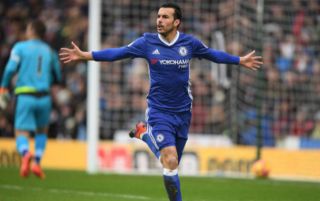 Chelsea have managed to tie down a key player before the start of the new season as Pedro puts pen to paper on a new deal at Stamford Bridge.

The 31-year-old has spent the last three years of his career in London and picked up Premier League and FA Cup winners medals in the process. With 131 first team appearances under his belt and 28 goals scored, the veteran winger has played an important role in the Blues’ recent success, with his pace and guile in the final third of the pitch which has added extra impetuous into the teams attack.

Pedro spent seven successful years with Barcelona in Spain before moving to London and has shown the experience and class that comes with playing at the highest level during his spell at Chelsea.

According to the Club’s official website, the Spaniard has now signed a contract extension which will keep him at Stamford Bridge until 2020 and he addressed the fans after announcing the news, saying he’s happy with their support and other aspects of his life with the club as he looks to continue winning major honours.

“It is very good for me, I am really happy here in the club, with my team-mates, the supporters and the club in general.” said Pedro, as CFC reports.

Pedro has signed a one-year contract extension with the Blues! ??https://t.co/4Fpe4fHjzH

“It’s important for me to continue with Chelsea, I am comfortable here and want to win new titles and trophies. I want to help the team, score goals, and I repeat, I am really happy.”

Chelsea has a new manager at the helm this season in Maurizio Sarri, bought in to replace Antonio Conte from Napoli and the Italian will no doubt be pleased to secure Pedro’s services for the next two years.

The former Barca man will once again be a key figure at the club as Sarri aims to implement a new style on the pitch and regain the Premier League title which was relinquished to Manchester City last season.