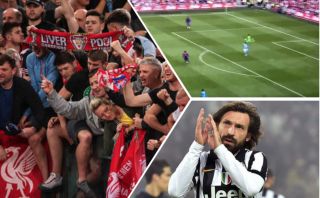 Some Liverpool fans got a bit carried away this evening, as they took to Twitter to heap praise on goalkeeper Alisson for a pass he made in the Reds’ pre-season friendly against Napoli.

The Brazilian, who joined the club from Italian giants Roma this summer, already has fans excited for the new season given just how good he was in Serie A and the Champions League last season.

However, we think they may have gone a bit too far with this one, as some were claiming that the Brazilian was better than Pirlo and had a better passing range that the midfielder did in his prime.

It’s been a stereotype of Liverpool fans over the years to get carried away on certain occasions, however we feel they’re definitely taking the cake with this one!

We mean, the pass itself was a blinder, but we see goalkeepers like Jordan Pickfor and Ederson do that week in, week out in the Premier League!

So, following this, we’ve picked out a few select tweets from fans overreacting to Alisson’s pass this evening.

We’ve also included a poll down at the bottom, so you can cast your vote on where you think Alisson ranks amongst the other ‘keepers in the Premier League.

We can already guess what Liverpool fans will be voting for…

Alisson’s passing is better than Pirlo’s ever was

Van Dijk praising Alisson when we scored because he knew it was his pass that started it all. ???

That Alisson pass to Mo Salah which led to the goal, goodness gracious me.

This guy is mighty special, no wonder Jurgen Klopp sanctioned a world record move for him and wrapped up the deal quickly!

This pass is unreal from Alisson can be so effective next season. ???pic.twitter.com/Alcy47TcUV