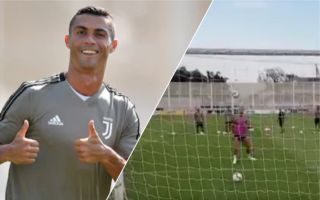 Cristiano Ronaldo has often been called one of the best players in the world in recent years, with his performances in both La Liga and the Champions League for Real Madrid reaffirming this.

And now, with his move to Juventus having been completed earlier this summer, it seems like fans of the Italian giants are buying into these claims, especially after this goal he scored in training on Friday.

In a video posted by Juventus on their official Twitter account, the Portuguese superstar was shown rattling a shot off the crossbar before tapping home with a very cheeky finish that came off his shoulder.

Following Ronaldo’s piece of brilliance, fans took to Twitter to heap praise on the forward, with some labelling him as the “best player in the world”, a claim that is far from ludicrous.

Here’s a few select tweets from fans waxing lyrical about Ronaldo following his fantastic goal in training. It’s hard to argue with some of these shouts…

Best player off all time

Best player in the world? pic.twitter.com/0tL733zDCw

Cristiano Ronaldo with the Best goal in training history. Messi can’t do this.