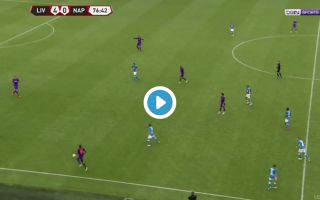 Liverpool put Napoli to the sword this evening, as goals from Daniel Sturridge and Alberto Moreno gave the Reds a commanding 5-0 lead.

The Reds, who have already beaten Man City and Man United this pre-season, made sure they were to make it three wins in a row after two strikes from Moreno and Sturridge.

The goals, which have surely now wrapped up the win for Jurgen Klopp’s side, were both products of Sturridge’s brilliance, as he not only scored their fourth, but also set up the fifth.

Here are clips of both of the strikes this evening. If one thing’s for certain, Liverpool look a real threat this season, even if it hasn’t truly begun yet!

Sturridge from RB to ping it towards Moreno from LB to score a brilliant goal. 5-0 against Napoli. pic.twitter.com/Xw9vv10v42

GREAT PASS FROM STURRIDGE AND GREAT FINISH BY MORENO pic.twitter.com/OrKNvzjvUw