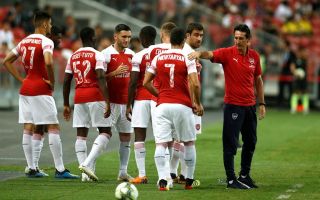 Arsenal have reportedly accepted a £4.4million offer from Sporting Lisbon that would allow Lucas Perez to seal a transfer away from the club.

The Spaniard has struggled in his time at the Emirates Stadium, barely featuring after joining in the 2016/17 season before going out on loan last term.

It now seems Perez is not in the plans of new Gunners manager Unai Emery either as he’s free to negotiate with Sporting, according to Portuguese outlet A Bola.

The 29-year-old could do well to play at a less competitive level such as the Portuguese top flight, with the Premier League looking a little too much for him in his brief time in England.

Perez shone in La Liga with Deportivo La Coruna, but has never truly looked quite good enough to be making the step up to a club like Arsenal.

The attacker faces plenty of competition for places up front in Emery’s squad, with last season’s signings of Alexandre Lacazette and Pierre-Emerick Aubameyang severely hindering his chances of getting much of a look-in up front.