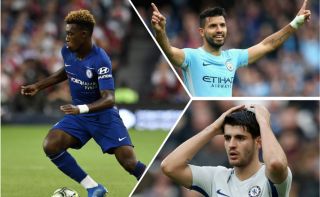 Manchester City and Chelsea put on a show today for the season’s opener at Wembley, as Pep Guardiola’s side ran out 2-0 winners to claim the 2018 Community Shield.

Two fine strikes from Sergio Aguero, the first being his 200th for the club, proved enough for City in the end, as they saw out the match to win their third piece of silverware since the end of February.

MORE: ‘Midfield is a shambles without him’ – Some Chelsea fans point out absence of key man against Man City

However, it wasn’t just the goals that gave us an influence of how these two sides might get on this season, but their overall play as well.

City controlled the game from start finish, whilst Maurizio Sarri’s side struggled to create good chances throughout the 90 minutes.

So following this, we’ve made five predictions about the season ahead following City’s win over the Blues at Wembley today.

The Spaniard barely reached double figures for goals in all competitions last season, and if today’s showing is anything to go by, it doesn’t look like he’s going to be scoring much more than that this time round.

The former Real Madrid man was often found isolated up top for Sarri’s side, and when the ball did come his way, he failed to do anything with it.

Not much service… not effective when he did get it. ? pic.twitter.com/xS4EGwF9HT

It seems as if Morata is trying different ways to spark his Chelsea career into life, as he dropped the supposedly cursed No.9 shirt this summer in favour of No.29.

It’s horrible seeing a player as good as Morata struggle with simple things, however we just can’t see him turning his Blues career around this year, especially now seeing as he could be set to have both Olivier Giroud and Michy Batshuayi to compete with.