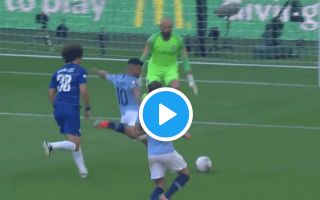 Man City looked in ominous form against Chelsea in their Community Shield meeting at Wembley on Sunday with Sergio Aguero amongst the goals.

The Argentine opened the scoring in the 13th minute to bring up his 200th goal for City, and he added his 201st in the second half as he produced a clinical finish to beat compatriot Willy Caballero.

In truth, he probably should of scored his second earlier but sent his effort into the side-netting, but when given another opportunity to find the back of the net, he made no mistake.

Aguero owes a debt of gratitude to Bernardo Silva though, as after some fine build-up play from the reigning Premier League champions, the Portuguese playmaker slid in a perfectly-weighted assist for Aguero to latch onto before sending his effort into the back of the net.

It was another quality goal from City as they seemingly look as though they’ve picked up from where they left off last season and look in great shape to contend for major honours again this season.

As for Chelsea, given the lack of time that Sarri has had to work with the players, it’s unlikely that the Italian tactician will see the best of his side immediately having only been appointed as boss three weeks ago.

It’s ?? for Aguero and @ManCity! pic.twitter.com/0jHR1wEH3T

Sergio Aguero is just lethal in the 18-yard box!

Two for him, two for City. No signs of rust at all ? pic.twitter.com/UY2yXoGh3G