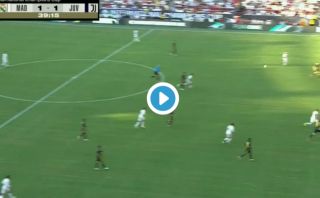 Gareth Bale showed he’s up to the task of filling the void left by Cristiano Ronaldo against Juventus, as the Welshman scored a stunning half-volley to draw Los Blancos level with the Old Lady.

It looks as if Bale is going to be a big part of Real’s side this season in comparison to last, and following his goal against Juventus, he sure proved that he’s still got a cracker of a left foot on him.

MORE: Real Madrid ready to fork out €100M for Barcelona starlet that Lionel Messi has encouraged to stay at Camp Nou

Having gone down early on to a Dani Carvajal own goal, Bale drew the Spanish giants level in the 39th minute, as he powered home his left-footed strike to give Wojciech Szcsesny no chance.

Here’s a clip of Bale’s stunning strike against Juve tonight. All we can say is: we cannot wait to see a fully-fit Bale in action for Madrid this season, especially if he’s scoring goals like this!

Great first touch and an even better finish by Bale ? #RMJuve pic.twitter.com/fdiYnw1tTl