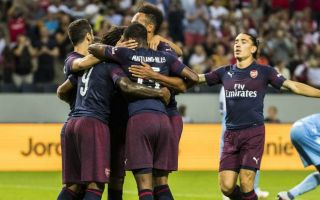 Arsenal striker Lucas Perez is reportedly eager to stay and fight for his place at the club under new manager Unai Emery.

This is despite interest in his services from Sporting Lisbon following a difficult spell at the Emirates Stadium so far, according to the Independent.

Perez barely featured in his single season with the Gunners in 2016/17 before being loaned out last term.

With the club signing big names up front in the form of Alexandre Lacazette and Pierre-Emerick Aubameyang since then, it’s hard to imagine the Spaniard has much of a chance now.

Still, the Independent claim the 29-year-old would prefer to stay in north London for the time being, so it’ll be interesting to see how this one pans out in the next few days.

Lucas Perez could leave Arsenal this week. West Ham and Sporting among the clubs interested in signing him. Perez ideally wants to stay in London but is keeping his options open. pic.twitter.com/pacIXhnLXd

The Premier League transfer deadline closes on Thursday evening, and though Arsenal could in theory still sell to foreign clubs after that, it perhaps seems less likely as they would be unable to bring in replacements.

Perez should at least prove a useful squad player as the likes of Danny Welbeck and Alex Iwobi have not really impressed in Arsenal’s attack.