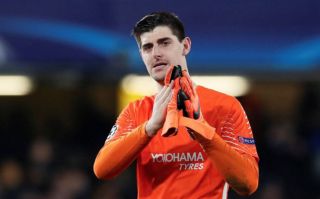 As noted by BBC Sport, the Belgian international failed to report for training on Monday as he continues to be linked with an exit from Stamford Bridge to seal a move to Real Madrid.

His absence could be interpreted as a major indication of his intention to leave, and if he does, Chelsea could have an ideal target in mind.

According to Mundo Deportivo, they have been tipped to pay Oblak’s €100m release clause to prise him away from Atleti, although they’ll have to be quick to wrap up a deal given that the transfer deadline for English clubs is on Thursday.

There’s no doubt that the Blues are looking in the right place to replace Courtois with a world-class successor between the posts as the Slovenian international has kept 68 clean sheets in 116 La Liga games for the Spanish giants.

Albeit, a significant part of the praise also has to go to Diego Simeone’s organisational skills and his defensive players, Oblak has certainly emerged as one of the top goalkeepers in Europe with his form for the club.

In turn, he would be a superb signing for Chelsea to fill the void left behind by Courtois, should he leave, although it remains to be seen how it impacts their other potential business this week if they are forced to spend €100m on one player.

It’s suggested that with other potential targets also commanding hefty price-tags, Chelsea have ultimately decided to go all out for the best on the market in Oblak. If the club deem it financially feasible, then there doesn’t seem to be too much to be concerned about, with Maurizio Sarri hoping he has enough at his disposal elsewhere to launch an assault for major honours this season.