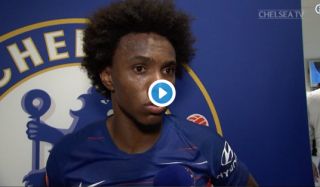 The Blues winger has been linked with Manchester United for much of the summer, with the Daily Mirror claiming just yesterday that the Red Devils were set to launch a late bid to bring him to Old Trafford.

MORE: Five predictions for the season ahead based on Man City v Chelsea: Morata’s struggles set to continue, City to remain dominant

In a short video shared from Chelsea’s official Twitter page, Willian stresses that he wants to stay at Chelsea, though another clip from Omnisport shows the 29-year-old admitting he doesn’t know what will happen and that his transfer situation is down to his club.

The Brazil international still suggests his preference is to remain at Stamford Bridge, but he doesn’t entirely rule out the chance of leaving amid rumours linking him with United.

Watch the two clips below and make your own mind up…