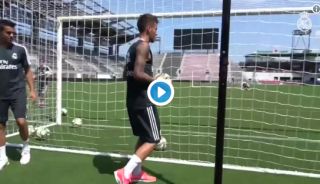 We seriously recommend watching this Dani Ceballos trick shot video from Real Madrid training as it’s quite unlike anything we’ve ever seen.

The young Spaniard may not be a regular for Los Blancos, but there’s a reason he’s long been regarded as one of the biggest talents in Spanish football.

In the clip below, he faces away from the back of the goal behind him, kicks the ball over his head and somehow gets the spin for it to bounce backwards over the goal line.

He then walks off triumphantly. What a boss.

We’ve watched it like a hundred times and still can’t work out how he does it. Bravo, Dani.