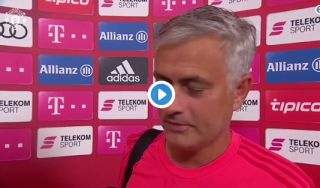 Jose Mourinho has been seen giving an interview praising Manchester United’s young players as his depleted side lost to Bayern Munich in yesterday’s friendly.

Without a number of big names such as Paul Pogba, Jesse Lingard, Anthony Martial, Romelu Lukaku and others, United were only narrowly beaten at the Allianz Arena.

Widely seen as a manager who favours big spending on marquee players, Mourinho was delighted to see the likes of Axel Tuanzebe and Tahith Chong playing against so many big names in the Bayern XI last night.

A number of rather paranoid United fans now feel this video is being ignored by the media…and yet there it is doing the rounds on Twitter…and here we are, covering it.

Is there anything to the conspiracy?

Mourinho praising the youth players after the loss to Bayern last night. Bet the media don't say anything about it? #mufc pic.twitter.com/EaTGWUbZlK

Jose praising the youth after today's game but the media won't mention a single word about it as it doesn't suit their mourinho agenda https://t.co/plgGkDF145

Wait what? Mourinho praising youths??????? You won’t hear about this from the media pic.twitter.com/Id7RobJQ1O

José Mourinho praising our youth players after the game tonight. No doubt the media won’t say anything about these comments though and will only concentrate on the negatives. pic.twitter.com/ScDTCMczjf

?Woah! What is this? Mourinho praising and giving chances to Youth? The media won’t report on this. #MUFC pic.twitter.com/SZ8gMzpofQ

Any #mufc fans please watch this
#mourinho post match interview before the media brainwash you with their photoshopped quotes https://t.co/qTQk0ucFH8

An upbeat Jose…. Good post match interview this…. but you won’t see quotes from here in the media… ??#mufc

The media won't show you this because it doesn't fit the agenda but this is Mourinho, full of praise for the kids that have made up the squad over the last few weeks. Don't buy into the headlines and soundbites, he's not the way they paint him. #MUFChttps://t.co/Db3gOalRzi

Mourinho didn't give youth a chance they said. https://t.co/SCzwzbUCpT