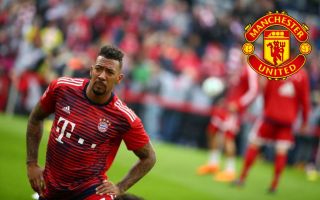 Manchester United’s pursuit of the Jerome Boateng transfer from Bayern Munich has not gone down too well with a seemingly large number of their fans on Twitter.

The Germany international has been one of Europe’s top defenders in recent years and most clubs would surely take him even if he is perhaps a tad past his peak.

Boateng is being linked with United by the Times among others, though HLN are among the sources also strongly linking the Red Devils with Tottenham centre-back Toby Alderweireld for that position.

United relied on some unconvincing names like Chris Smalling, Phil Jones and Victor Lindelof last season, while Eric Bailly has had his fitness problems in his time at Old Trafford.

Still, these fans are not happy and believe Boateng is just a German Smalling, slamming their club for resorting to this somewhat desperate signing.

While it’s unclear if this is the majority view, there are plenty being very vocally against this transfer as speculation hots up…

Can't understand what Mourinho sees in Boateng. Sounds like Bayern are happy to get rid and the last time that happened, they dealt us Basti, who was utterly cooked.

Paying 50m for a German smalling ??

No thanks lol don't need the German Chris Smalling https://t.co/bmrGu44mmQ

Alderweireld for 50m or boateng for 40m , just pay the cash for Toby , richest club in world apparently and we always penny pinch ?

Been linked to Alderweireld and Maguire for weeks and we’re gonna end up with Jerome Boateng aren’t we ?

If we sign Boateng and not Alderweireld then I give up. Jose will have full reason to bitch and moan

Hopefully another load of bullshit paper talk about Jerome Boateng… same price as Toby Alderweireld?! For a 29 year old, injury prone CB who's only played 24 games in the premier league, many moons ago?! Jog on mate… get Toby signed up! #MUFC ???