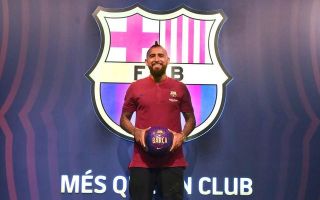 Arturo Vidal was officially unveiled as a Barcelona player on Monday, and the Chilean international has some big targets at the Nou Camp.

The 31-year-old has joined the Catalan giants in a deal worth €21m, as reported by Sport, as he looks to build on the success that he has previously enjoyed at both Juventus and Bayern Munich.

Given the strength of the squad at the Nou Camp, the chances of him adding to his trophy collection are high, albeit it will undoubtedly be difficult as it is every year for them to not only secure silverware domestically but also get back to the top of the European tree.

Nevertheless, Vidal is seemingly eager to ensure that he leaves his mark on Barca, as he has insisted that he wants to win the Champions League in every year of his contract over the next three years as he is clearly prioritising that competition having now joined the La Liga champions.

“I am very happy to join Barcelona, the best team in the world, where the best are, I come hungry for titles I come with the best energy, to leave my heart on the pitch,” he is quoted as saying by Mundo Deportivo. “I hope I can win three Champions League trophies in the three years that I will be here.”

With Paulinho leaving the Nou Camp earlier this summer, Vidal arguably fills that void perfectly with his tenacity and energy in midfield. It should now offer Ernesto Valverde a good balance in that area of the pitch, while combined with his winning pedigree and work ethic, the Chilean ace could be a very important addition this summer.

Time will tell though if he is able to achieve the objectives that he has set out for both himself and the club in the next few years.