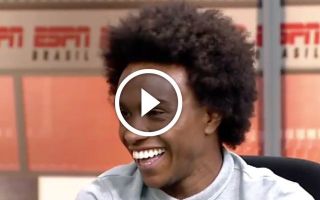 Chelsea winger Willian has addressed his difficult relationship with former boss Antonio Conte and revealed that he felt the Italian tactician didn’t like him.

The Brazilian ace was seemingly liked enough to feature 55 times last season, scoring 13 goals and providing 12 assists in an impressive campaign on an individual level.

However, the 29-year-old was unable to prevent Chelsea from missing out on the Champions League with their fifth-placed finish, and Conte has since departed with compatriot Maurizio Sarri replacing him on the hot seat at Stamford Bridge.

Whether or not Willian will enjoy a better relationship with his new coach remains to be seen, but as seen in the video below when speaking to ESPN Brazil, he has revealed that he got the impression from Conte that he didn’t like him very much.

Further, he couldn’t stop himself from grinning after suggesting that it was his daughter who edited a photo that was posted on Instagram after Chelsea’s FA Cup triumph last season, with Conte covered up by trophy emojis.

That’s probably the worst lie we’ve heard in a while but given he was laughing at the same time, it’s pretty obvious Willian was joking. Whether or not Sarri finds his comments funny or not remains to be seen with the new Premier League campaign just days away…

Willian blames his daughter for blocking Antonio Conte out of his Instagram photo ? pic.twitter.com/XtA9VnnRtX