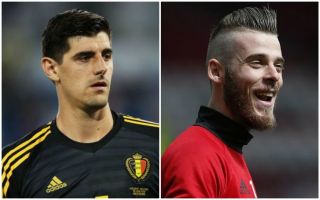 Some Manchester United fans are pretty pleased with the news that both Chelsea and Real Madrid have confirmed the Thibaut Courtois transfer this evening.

The Belgian goalkeeper moves from Stamford Bridge to the Bernabeu on a six-year deal, according to Madrid’s official site, with Mateo Kovacic moving on loan to Chelsea, according to chelseafc.com.

Real finally signing a big name in goal follows plenty of speculation down the years involving Manchester United shot-stopper David de Gea, who notably nearly made the same move only for the deal to fall through.

MORE: Chelsea will have to pay £63 million to acquire talented attacking midfielder

The Guardian reported at the time that Real were late to get the paperwork through, leading supporters now to hail the mythical faulty fax machine.

Assuming Courtois is a success in the Spanish capital, one imagines Los Blancos won’t be signing another ‘keeper any time soon, which should be good news for United in terms of keeping De Gea for the long term.

Aahhhhh what a day that was. Thank you, fax machine ?? #lrt

went from de gea to courtois cause of a fax machine loooooooool https://t.co/9YMGunjoQf

No more De Gea to Madrid thanks to that fax machine

With Courtois gone, Man United have a chance to keep David De Gea at the club for all his career. ?