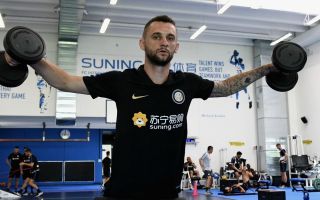 Tottenham have reportedly made an offer to Inter Milan for Croatian midfielder Marcelo Brozovic, with tomorrow’s transfer deadline fast approaching.

Brozovic moved to the San Siro back in 2015 from Dinamo Zagreb and has since established himself as a key member of the Nerazzurri squad. With over 101 appearances under his belt and 13 goals scored, the 25-year-old has proven himself as a reliable and versatile midfielder during his time in Italy and his performances last year saw him called up to the Croatia squad for this summer’s World Cup.

He only made two appearances in Russia but was a part of the squad which managed to make it all the way through to the final against France, just coming up short at the final hurdle with a 4-2 defeat against Didier Deschamp’s men.

According to Croatian news publication Sportske Novosti, Brovoski is now the subject of a bid from Tottenham Hotspur in the Premier League and the English side have already tabled a bid of €40 million for the midfielder’s services.

Sportske Novosti also reports that Inter will hold out for a higher offer of €50 million which would meet the release clause in the midfielder’s current contract with the club.

Spurs boss Mauricio Pochettino has yet to make a signing in the transfer window so far, but if he can push this deal over the line it would provide him with more options in the middle of the park ahead of the new season.

Tottenham’s opening game of their 2018/19 campaign kicks off on Saturday against Newcastle United and supporters will hope that the team can get off to a good start as they bid to improve on last seasons 3rd place finish.