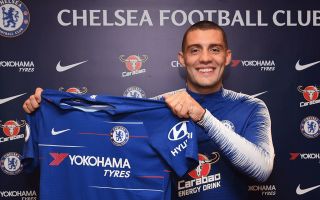 Chelsea have officially announced that Mateo Kovacic has joined them on a season-long loan deal from Real Madrid.

The 24-year-old arrives after a frustrating time at the Bernabeu, with fierce competition for places restricting him and his playing time alongside the likes of Toni Kroos, Luka Modric and Casemiro.

In turn, a move to Chelsea could be an ideal short-term solution for him, as he’ll look to impress Maurizio Sarri and establish himself in his starting line-up as quickly as possible.

Given the Italian tactician has been lauded for his expansive, possession-based style of play in impressive spells with Empoli and Napoli, the addition of a player like Kovacic who possesses bundles of technical quality and creativity, should be an ideal scenario for him.

Paired with fellow summer signing Jorginho and N’Golo Kante, Chelsea may well have a solid balance in midfield this season between defensive protection, energy and creativity to dominate the tempo of a game.

Based on his comments below, Kovacic is delighted to move to Stamford Bridge and can’t wait for the new challenge that awaits him this season.

“I am really happy and excited to be here at Chelsea. It is an amazing feeling,” he told the club’s official site.

“I will try to do my best for this club. It is a new league for me, the beginning is always tough but I am sure the coach and my new team-mates will help me and I am looking forward to a great season.”

Chelsea get their Premier League campaign underway against Huddersfield this weekend, and so it remains to be seen if Kovacic’s transfer goes through in time and whether or not Sarri is ready to immediately throw him into the action.

All confirmed! ?@Mateo_Kova23 is a Blue for the season ahead! #WelcomeKovacichttps://t.co/Nqxf6cxxuN

.@Mateo_Kova23: ‘I am really happy and excited to be here at Chelsea. It is an amazing feeling. I will try to do my best for this club.’ ?#WelcomeKovacic pic.twitter.com/CKHVtCA8rJ