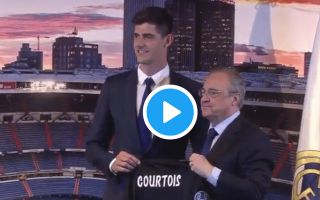 Real Madrid have officially unveiled Thibaut Courtois as he has completed his summer move from Chelsea.

The Belgian international established himself as one of the top goalkeepers in Europe during his spells with the Blues and Atletico Madrid.

However, he now begins a new chapter in his career at the Bernabeu, as he’ll hope to play a key role in sustaining the club’s success in recent years.

The 26-year-old’s first challenge will be to displace Keylor Navas as the first choice option between the posts, while Kiko Casilla and Andriy Lunin will now seemingly be pushed down the pecking order.

Given that they’ve landed a world-class goalkeeper though, it would be a surprise if he didn’t immediately emerge as a permanent fixture in Julen Lopetegui’s starting XI.

Nevertheless, Courtois enjoyed his moment on Thursday as he was unveiled to the media by club president Florentino Perez, as seen in the video below, and the former Chelsea shot-stopper was undoubtedly delighted to have confirmed his return to the Spanish capital.

“Today I am realising a dream,” he noted. “This is the best club in the world.

“However, joining the best club in the world is a responsibility and a source of pride.”

Meanwhile, Chelsea wasted little time in replacing their former No.1, as BBC Sport note that the Premier League giants splashed out £71m on Spaniard Kepa Arrizabalaga from Athletic Bilbao.