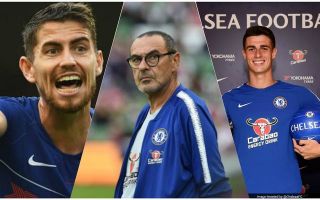 Chelsea begin life under Maurizio Sarri this season as they look to bounce back from the disappointment of last year having missed out on Champions League football.

Read on for our review on the new manager at Stamford Bridge, his new signings and how they might fare this coming season…

Antonio Conte’s reign is over as Sarri steps in looking to make a drastic change at Chelsea. From the pragmatic and organised former boss to his compatriot who has been lauded during spells with Empoli and Napoli for his expansive, high tempo and attacking ‘Sarri-ball’ style of play, as detailed by The Telegraph, it’s quite the switch.

Entertaining football is great, but as Chelsea have shown with previous managers, they aren’t scared to make a change if things aren’t going to plan.

In turn, Sarri will have to couple his style of play with a winning pedigree, and he has to do it quickly having only had a few weeks in charge given his late appointment last month.

While he failed to win major honours at Napoli, they came closer than anyone in recent years to toppling Juventus and ending their reign as the dominant force in Italy.

Competition is fierce in England though with Man City setting the standard last season, but Sarri’s more expansive approach could be just what Chelsea need to get the supporters behind them and moving in the right direction on the pitch.

Two major additions in particular were made this summer, with BBC Sport noting that £50m was spent on Jorginho to secure an immediate reunion with his former Napoli boss, while a further £71.6m was splashed out on bringing Kepa Arrizabalaga to west London to replace Thibaut Courtois, as per The Guardian.

With that in mind, Sarri has had the backing of the hierarchy to bring in fundamental pieces, and they will be absolutely vital to his hopes of implementing his style of play.

Jorginho will make Chelsea tick in midfield. The Italian international’s technical quality, vision and passing range were fundamental to Napoli over the last two years, and he’ll look to replicate that at Stamford Bridge now too in the heart of the team.

Coupled with N’Golo Kante and Mateo Kovacic, who arrived on a loan deal from Real Madrid, Sarri should have an ideal balance and all the technical class needed to play good football while having the energy and tenacity to also form a solid base.

Jorginho’s influence is already rubbing off on others, as he’s been busy teaching Kante all about ‘Sarri-ball’, and expect more orchestrating like this throughout this season.

Maestro Jorginho. Tells Kanté to run forward, and 5 seconds later plays a through ball to get him 1v1 with the keeper. pic.twitter.com/UACZFFH47Z

As noted above, Jorginho’s ability to dictate the tempo of a game in midfield is going to be crucial to how Chelsea operate this season and the subsequent success they enjoy.

Kovacic will help in the creative phase and take some of the responsibility off his shoulders, but in terms of providing defensive coverage while continuously recycling the ball in midfield, the keys to this Chelsea side will be handed to the 26-year-old.

An argument could be made for Ruben Loftus-Cheek too after his impressive impact at the World Cup this summer, but Callum Hudson-Odoi featured in pre-season and seemingly made an impression on Sarri.

Whether or not he gets the opportunities he craves when the World Cup stars have all returned remains to be seen, but the 17-year-old could be the youngster to look out for this season with the Blues looking to compete on various fronts.