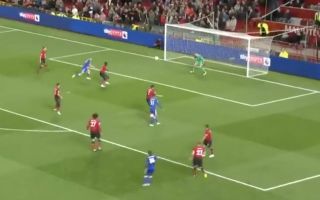 Leicester City striker Jamie Vardy grabbed a late goal which was ultimately in vain for his side as United won 2-1 at Old Trafford on Friday night.

Manchester United have won the opening game of the new Premier League season 2-1 against Leicester tonight, with the England striker grabbing the final goal of the match in the dying moments.

Ricardo Pereira swung in a late cross as Claude Puel’s team chased a way back into the game, which ricochetted off the post straight into the path of Vardy, who nodded the ball past De Gea to open his account for the season.

Thanks to goals from Paul Pogba and Luke Shaw, Manchester United have got off to the best possible start in their 2018/19 campaign with tonight’s win, whilst Leicester City will have to wait another week for an opportunity to put their first points on the board.

Puel’s men can leave Old Trafford with their heads held high, however, after producing as a spirited performance which should encourage supporters going into their next fixture against newly promoted Wolves.