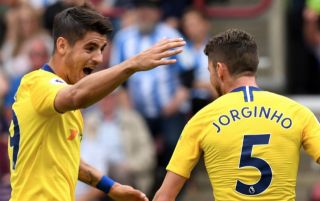 Chelsea got their Premier League season underway in perfect style this afternoon, as Maurizio Sarri’s side hammered Huddersfield 3-0 at the John Smith’s Stadium.

The away side, who were playing their first every league game under Sarri since his arrival from Napoli this summer, got their season off to a great start in the 34th minute thanks to a goal from N’Golo Kante.

MORE: “Must improve” – these Chelsea fans slam Blues star despite Sarri’s side having lead against Huddersfield

Jorginho then opened his Premier League account just before half time, as the Italian cooly slotted home a penalty to give the Blues a 2-0 lead going into the break.

Huddersfield struggled constantly to create chances throughout the match, with their best effort coming from Laurent Depoitre, who hit the bar in the first half.

Chelsea often looked in complete control of the game, with the home side struggling to cope with the Blues’ ‘Sarri-ball’ style of play.

Sarri’s team finished off Huddersfield with just 10 minutes left to play, as Pedro was played through by Eden Hazard, with the Spaniard applying a fantastic lobbed finish to wrap up the win for the west London side.

Forward Alvaro Morata didn’t have the best of games in a Chelsea shirt, with the former Real Madrid mad struggling to make any impact at all for the away side throughout the 90 minutes.

The same cannot be said for Jorginho however, with the former Napoli star putting in a man of the match style performance for the away side on his Premier League debut.

The Italian international was at the heart of all things good that came from Chelsea, with his calmness on the ball proving to be a real asset for the Blues.

The win now means that Sarri’s side are top of the Premier League until tomorrow at least, a sight we’re sure Blues fans are delighted with, even if we are only one game into the season!