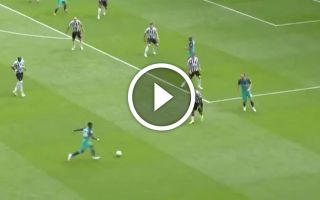 Tottenham and Newcastle United played out a thrilling start to their Premier League clash on Saturday, with three goals in the first 18 minutes.

Jan Vertonghen had given the visitors an early lead, only to see Joselu hit back almost immediately to draw Newcastle level.

However, it wasn’t long before Tottenham were back ahead as Mauricio Pochettino’s men look to put all the talk of their lack of summer transfer activity behind them and focus on football matters on the pitch.

After a brilliant delivery from Serge Aurier from the right hand side, Dele Alli rose highest and nodded the ball into the back of the net to restore Tottenham’s lead as they went into the break ahead.

Based on the assist, it would appear that Aurier has been working with teammate Kieran Trippier on his deliveries into the box as the England international has undoubtedly established himself as one of the top crossers of the ball.

WATCH: Dele Alli is picked out perfectly to nod Tottenham back in front against Newcastle. A flying start at St James’ Park