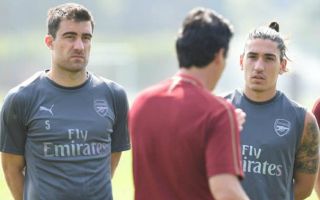 The Spanish tactician took over from Arsene Wenger this summer, and has big shoes to fill in replacing such a legendary figure at the club.

And while he’s at it, Emery has to do so whilst adapting to a new league and settling in to a new country altogether.

Thankfully, he has his fellow countryman Bellerin to help him learn the new lingo, though the defender insists the new head coach is not relying on any Spanish and is making a big effort to communicate only in English, as reported by James Benge of the Evening Standard.

Bellerin reveals he's helping Emery learn English, adding: "He's making a great effort and it's still early stage but I think he showed a lot of respect from day one. He's doing everything in English, he hasn't used anyone to translate and he's putting in 100 per cent." pic.twitter.com/CSX06oVePi

Emery takes charge of his first Premier League game in charge of Arsenal today as they welcome champions Manchester City to the Emirates Stadium for a rather daunting first fixture of the post-Wenger era.

He’ll certainly need his communication skills up to scratch by this point if the north Londoners are to pull off his tactics and do what’s needed to get an unlikely victory.