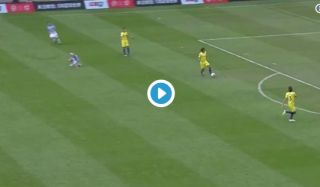 The Italian tactician has been in the job less than a month, not having a huge amount of time to truly stamp his authority down on a squad of players that struggled so much under Antonio Conte last season.

Sarri is famed, however, for his teams’ fine possession-based football at Napoli, and this video below shows how well he’s getting his methods across at Chelsea.

This 14-pass sequence leads to Chelsea winning a penalty against Huddersfield Town yesterday, which Jorginho duly slotted away to make it 2-0 on their way to a comfortable 3-0 win.

If this is the kind of football we can expect from Sarri’s Chelsea, they’re going to be great to watch this season.

14 pass sequence leading up to the penalty pic.twitter.com/HQ4ScgMPV7