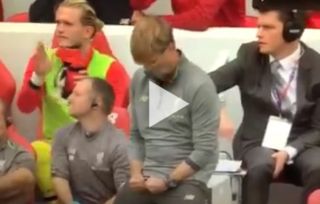 Here’s a pretty weird video of Jurgen Klopp’s celebration as Liverpool made it 2-0 against West Ham today.

Seriously, we all love the bubbly and eccentric German, but this is a pretty disturbing watch, if we’re honest.

Sadio Mane completed a superb Liverpool team move to make it 2-0 just before half time and seemingly put this game to bed, but Klopp might have got a little too over-excited.

In fairness, with LFC being talked up as title contenders this season, this looks a very impressive start and perhaps the prospect of a serious chance at a first league title since 1990 is simply too arousing not to let your instincts take over…

Klopp mate, what the f*ck are you doing. pic.twitter.com/CJacoy2TYC

Did anyone see Klopp celebrating Mane's goal
WTF was he doing man ???#LIVWHU