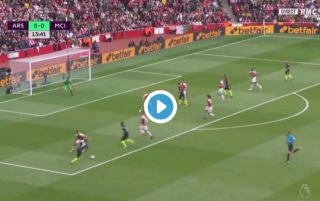 Raheem Sterling bagged a fine solo goal this afternoon, as the England international put Man City a goal to the good against Arsenal at the Emirates.

The winger, who was chosen to start the game ahead of the likes of Leroy Sane, gave the reigning champions the lead just 13 or so minutes in after being set up by Benjamin Mendy.

Here’s a clip of Sterling’s fine effort today. A goal that anyone would be proud to call their own!

Raheem Sterling opens the score for @ManCity vs @Arsenal in London