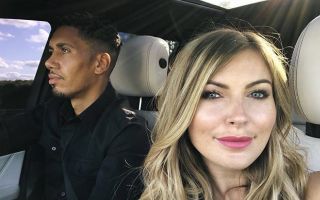 Playing with Alexis Sanchez since January has clearly had a big impact on Chris Smalling.

He, like the former Arsenal star, now counts a canine companion among his best friends.

Alexis made golden retrievers Atom and Humber famous via his Instagram account by constantly sharing photos of his hairy pals.

But not even Alexis went as far as taking his dog on a cafe date.

After being an unused sub in United’s 2-1 win over Leicester on Friday night, Smalling went out for coffee over the weekend.

As well as his four-legged friend, he was accompanied by his wife Sam Cooke, who documented the trip on Instagram.

The dog, called Miley, is a big fan of Smalling.

Breakfast with the fam at @thegardenhale 💜 . . . . #vegan #veganbreakfast #plantpower #plantbased

Tickles off her favourite person in the 🌍 #mileymoo @smalling