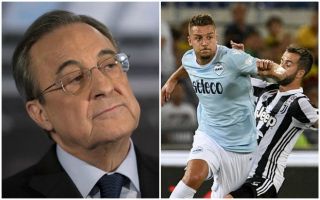 Real Madrid have reportedly emerged as the only likely destination for Lazio ace Sergej Milinkovic-Savic before the transfer deadline in Spain this month.

The 23-year-old has become one of the most in-demand players in Europe having impressed in the Italian capital to this point.

While the Serbian international has bagged 17 goals and 14 assists in 94 Serie A games, the statistics don’t tell the entire story given the attributes that he has, coupled with the room for development that still remains.

With his physicality, agility, defensive ability as well as his threat in the final third, Milinkovic-Savic could emerge as a top all-round talent in the years ahead and Real Madrid are seemingly keen on overseeing that process at the Bernabeu.

According to Calciomercato, Lazio are set to make a decision on their prized asset in the next 48 hours, with Real Madrid suggested as the only real destination on the table for the €130m-rated ace despite reports linking AC Milan with a swoop.

While the transfer window remains open in Spain until August 31, the deadline in Italy is on Friday and so the last thing Lazio want is to lose their biggest talent and then have no time at all to replace him for the start of the new season.

Despite losing Cristiano Ronaldo this summer, it’s questionable though as to whether Milinkovic-Savic is a player that Real Madrid actually need.

His talent makes him an obvious target for the club as they look to build for the future to sustain their recent success, but Julen Lopetegui already has Luka Modric, Toni Kroos, Casemiro in midfield along with the likes of Marco Asensio and Isco to play between the lines.

In turn, it’s difficult to see where Milinkovic-Savic would force his way in and especially at €130m, perhaps replacing the goals of Ronaldo should be more of an immediate priority.