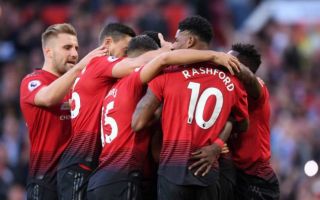 Manchester United manager Jose Mourinho told his team the two players who impressed him most after their Premier League opening day win over Leicester City.

The Red Devils won 2-1 at Old Trafford thanks to goals from Paul Pogba and Luke Shaw, with the latter one of the two players who really caught his eye.

The other, according to the Metro, was young midfielder Andreas Pereira, who also earned a start in the middle of the park following a strong pre-season after returning from a loan spell at Valencia.

United fans will no doubt be delighted to see two of their young players impress on the first day of the season, and it’s also a boost that Mourinho himself has acknowledged these performances.

The Portuguese is known to have exceptionally high demands and can be difficult for some players to work with.

Mourinho has also earned a reputation for failing to give young players much time in his teams over more established big-name signings, so it’s good to see these two have sufficiently impressed him that they could perhaps be key members of his squad this season.