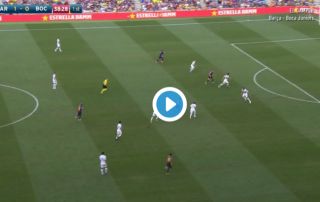 Lionel Messi scored an exquisite little dink for Barcelona this evening to put the club in cruise control on their match against Boca Juniors in the Joan Gamper trophy.

The Argentine superstar, who only played his first game of the new season against Sevilla on Sunday, put the home side 2-0 to the good in the first half, as he bagged a cheeky chip after finding himself one-on-one with the Boca ‘keeper.

Despite not having the best of World Cup campaigns with Argentina this summer, it still seems Messi is as good as he’s ever been, something that will fill Barca fans with confidence going into the new season.

Here’s a clip of Messi’s goal. The audacity of this man is unparalleled!