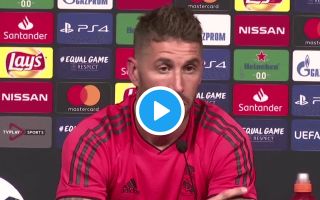 Real Madrid defender Sergio Ramos has responded to Jurgen Klopp over his criticism of his actions in the Champions League final last season.

The Spaniard was involved in a contentious incident in the first half of the meeting between Real Madrid and Liverpool in Kiev in May, where his challenge led to Mohamed Salah being forced off with a shoulder injury.

SEE MORE: “We will help Bale have a great season” – Lopetegui backs Bale to shine

While Klopp has since commented on it on at least two separate occasions following questions for his opinion on the matter, Ramos has seemingly had enough of being spoken about by the Liverpool boss.

As per the video below, the 32-year-old has referred to his own success at the highest level while also questioning Klopp’s record in finals after another defeat.

However, he did go from disrespectful to making an attempt to end the issue as he revealed that he voted for the German tactician as the Coach of the Year to show that despite the apparent bad blood between the pair, he’s still able to respect and acknowledge his achievements.

The war of words continues! ?

“Some of us have been operating at a very high level for many years – not sure he can say the same.” ?