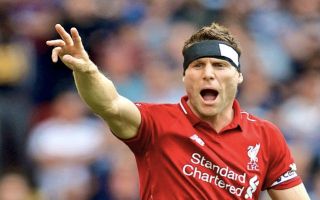 Liverpool defender James Milner has called on the team to reach its potential by finally adding some more silverware to the trophy cabinet at Anfield.

The 32-year-old midfield veteran joined Liverpool back in 2015 from Manchester City and has since gone on to make 109 appearances for the club. Milner has been a key part of the squad under Jurgen Klopp which has managed to finish in the top 4 for consecutive seasons and even reached the Champions League final last term.

During the summer transfer window, a host of new names have been unveiled at Anfield, including Brazilian goalkeeper Alisson and Guinean international Naby Keita, which has only raised the expectation amongst supporters that this could be Liverpool’s year to finally win the Premier League title.

Manchester City won it at a canter last season, by 19 points from runners-up Manchester United but after the Red’s dispatched West Ham in the opening game of their latest campaign on Sunday 4-0, Jurgen Klopp’s men are fast emerging as the favourites to dethrone the reigning champions in May.

According to The Mirror, Milner told reporters: “Expectations should be high. We’re at Liverpool.

“It’s a massive club where expectations are always high because there is a great history of winning things here.

“I’ve been here for three years now and in that time we’ve been to three finals and come so close to winning silverware. You can see the progression of the team since the manager has been here. We are capable of beating anyone.

“The team has evolved and we’re moving forward all the time but I think it is time we got over the line and won a piece of silverware.”

Liverpool’s next game is against Crystal Palace at Selhurst Park on Monday night and supporters will hope that the team can keep up the momentum and keep the pressure on at the top of the table in the early stages of the new season.

Hands up if you’re ready for Monday night. ?? pic.twitter.com/IRTJWNtsiQ