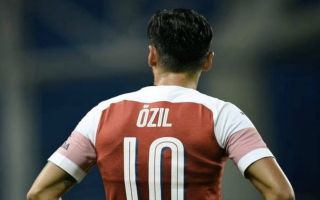 Former Arsenal striker Ian Wright believes Ozil must ‘rise above’ the criticism he has received recently and concentrate on making a difference for the team.

Ozil moved to The Emirates from Real Madrid back in 2013 and has made over 180 appearances in all competitions for the Gunners. During that time he has also contributed 27 goals and 50 assists in the Premier League and enhanced his reputation as one of the world’s most talented midfielders in the process.

The 29-year-old even became a World Cup winner in 2014, starring for Germany in Brazil as they beat Argentina in the final to win the most coveted trophy in the game. However, fast forward 4 years and the German midfielder finds himself at the complete opposite end of the spectrum, having been eliminated with his country in the group stage in Russia at this year’s finals.

SEE ALSO: Arsenal injury news: Star ruled out for up to eight weeks, but Unai Emery gets timely boost

Not only was Ozil harshly criticised for his performances by supporters, but he was also embroiled in a controversial saga pre-tournament because of a meeting he had with Turkey president Recep Tayyip Erdogan, which German fans saw as a betrayal of his national identity.

Now one of Arsenal’s most successful players ever has spoken out on the issues regarding the former Madrid star and stated that it is time for Ozil to focus on his performances on the pitch.

According to Goal, Ian Wright said to Omnisport: “He’s somebody that is always getting a lot of criticism, and it’s up to [him] to rise above that and try to perform in the way that people know he’s capable of performing,

“People know what he’s capable of if you give him time and space, so they’re not going to give him that, they’re going to deny him that.

“It’s up to him to try and find that space and try to make an impression on the game.”

The next opportunity Ozil has to silence his critics comes this Saturday at Stamford Bridge, where new manager Unai Emery will pit his wits against the latest Chelsea boss Maurizio Sarri.