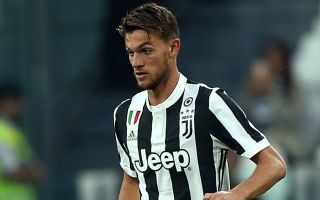 Juventus defender Daniele Rugani is set to sign a new long-term contract to keep him in Turin until 2023, which could spell the end of Chelsea’s interest.

Rugani joined Juventus in 2013 after spending a portion of his youth career on loan at the club from Empoli and has since gone on to make 54 appearances for the Italian champions. He was loaned straight back to Empoli for the first two years of his spell in Turin but has made great strides forward with the first team since, becoming a valuable member of Massimiliano Allegri’s squad.

Although Rugani has never been a regular starter for Juventus, he has proved himself as a competent centre-back with good instincts and composure on the ball – qualities which have also earned him 7 caps for Italy at international level.

According to Inside Futbol, Chelsea had been keen on bringing the 24-year-old to Stamford Bridge this summer but ultimately failed to negotiate a deal with Juventus before the English transfer deadline. It now looks likely that he will remain in Serie A for well beyond this season amid reports of him being close to signing a new contract – as per Tutto Mercato.

The Italian publication Tutto states that Rugani will put pen to paper on a new deal worth €3.5m per season, which will see him remain at the Allianz Stadium for 5 more years.

This latest news will come as a minor blow to Chelsea supporters, who might have hoped the club would continue in its pursuit of the Italy centre-half in January. Any club interested in Rugani now would likely have to pay a huge fee to lure him away from Juventus, which could put off any potential bidders including the Blues in the future.