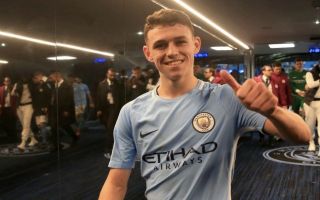 Foden is a product of the City youth system and has spent 9 years in total on their books, finally breaking through to the senior squad in 2017 under Pep Guardiola’s stewardship. The 18-year-old has made 9 first team appearances in total since then, most recently in last weekend’s 2-0 victory against Arsenal at The Emirates in the champion’s first game of the new league season.

The young English midfielder shone in the middle of the park on Sunday, displaying supreme confidence in possession which belies his tender age and helping to drive the team forward with his superb vision and technical ability. He really did look as though he’d been playing at the top level for years and his performance was certainly encouraging enough to suggest that he could feature prominently for the Citizens this season.

According to Sky Sports, Belgian playmaker Kevin De Bruyne sustained a serious knee injury in training yesterday which could see him miss at least two months of fixtures for Guardiola’s side. Although that news will come as a huge blow to supporters who rightly view the Belgian as their team’s talisman, former Southampton midfielder turned pundit Matt Le Tissier believes Foden could now step into his shoes.

Le Tissier told Sky Sports: “He [Foden] might not be the first choice to take De Bruyne’s position in the big games but it will certainly enhance his chances of playing time. It’s the perfect time for him to step up.

“From what I’ve seen of him so far he has the ability to make the most of the chances he gets. I don’t think there’s too many others out there in his age bracket with the same potential.”

City’s game against Huddersfield on Sunday will be their first home game of the latest Premier League season and the Etihad will surely be rocking if Foden features and can produce the same kind of magic he showed against Arsenal.