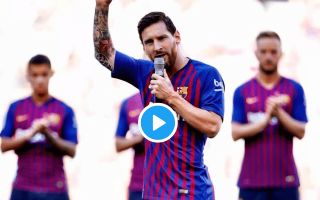 Lionel Messi addressed the Barcelona fans at the Nou Camp on Wednesday, and pledged that the squad would do everything possible to deliver the Champions League this season.

The Catalan giants swept aside Boca Juniors to win the Joan Gamper trophy on Wednesday night, with Messi, Malcom and Rafinha scoring the goals.

However, with Andres Iniesta leaving the club at the end of last season, Messi has now been handed the captaincy on a full-time basis ahead of the new campaign.

In turn, he gave a speech to supporters prior to the start of La Liga, and insisted that while Barcelona want to build on their domestic success last season which saw them win the double, Messi and his teammates are targeting the Champions League this year as he promised they will do everything possible to bring it back to the Nou Camp.

Time will tell if that materialises, but there’s no doubt that the Argentine maestro will be fundamental to their chances of doing so…