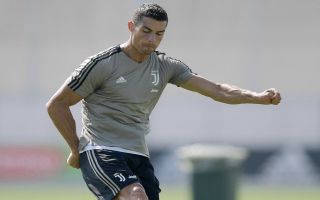 Cristiano Ronaldo will make his Serie A debut for Juventus tomorrow in the first game of the new Italian season, Massimiliano Allegri has confirmed.

Ronaldo re-located to Turin this summer after a 9-year spell with Real Madrid in Spain, as the 5 time Balon Dor winner moves on to perhaps his final challenge in European football. The Portuguese forward scored 442 goals for Real Madrid in 399 appearances and finished his time at the Santiago Bernabeu as the club’s all-time record goalscorer.

He is all his country’s all-time record scorer at international level with Portugal, having contributed 85 goals in 154 appearances – most recently hitting four goals for the team during the World Cup finals in Russia. The 33-year-old is quite simply one of the best players to ever grace the game and his appetite for success doesn’t seem to be dwindling as he approaches the latter stages of his career.

According to The Independent, Juventus head coach Massimiliano Allegri has today revealed that Ronaldo will start in the team’s opening game of the 2018-19 Serie A season on Saturday against Chievo Verona.

As per The Independent, the Italian boss said to reporters today: “Cristiano Ronaldo will make his Serie A debut for us tomorrow,

“Cristiano is no ordinary footballer. His career statistics are testament to that. He brings added value to our team, but we must not rest on our laurels and believe that we’ll win games just because we have him on our side.”

The Old lady has dominated Italian football over the last few years and will want to continue their run of consecutive domestic doubles this year, having won the last 4 on the bounce. Supporters will hope that Ronaldo’s presence will also give Juventus the best chance of lifting the Champions League once again, after losing two finals over the last 5 years.

The former Madrid superstar won 4 European Cup’s in Spain and he certainly has the experience and quality to drive his new team towards similar success over the next 12 months.