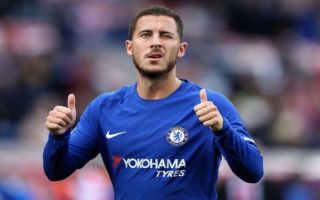 New Chelsea manager Maurizio Sarri has stated his belief that Eden Hazard will remain at Stamford Bridge for the rest of the season, despite Madrid interest.

Hazard joined The Blues back in 2012 from French Ligue 1 outfit Lille and has since gone on to make over 300 appearances for the senior squad. He has also managed to contribute 89 goals and establish himself as one of the most technically gifted players in Europe over the last 6 years, displaying incredible dribbling skills and ball control on a regular basis.

The Belgian midfielder spent the summer with his country in Russia at the World Cup, where he once again impressed and stood out as one of the best players in the entire competition, narrowly missing out on the Golden Ball award to Croatia’s Luka Modric.

The 27-year-old featured for Chelsea last weekend in the team’s opening league victory against Huddersfield, coming on for the final 14 minutes and making a huge impact, successfully completing 6 take-ons and setting up Pedro for the final goal of the game.

According to Sky Sports, Hazard has been linked with a move to Real Madrid in Spain this summer, but Sarri is adamant that their star man will remain at the club for at least one more year.

The Italian boss told Sky Sports: “I have spoken to him often in 10 days, but he has never said anything about [leaving]. I am sure Eden will be with us this season.”

Sarri’s comments will be music to the ears of supporters ahead of Chelsea’s showdown with Arsenal tomorrow at Stamford Bridge, with Hazard in line to make his first start of the new Premier League season.

Should he produce his best form on Saturday then it could be a very difficult afternoon for Arsenal who are looking to avoid back to back defeats after losing to Manchester City last Sunday.