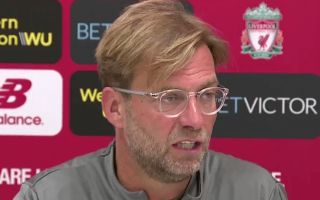 Jurgen Klopp’s habit of referencing the popular film franchise Rocky when talking about his Liverpool side continued at today’s pre-match press conference.

Liverpool started their latest Premier League campaign with a bang last Sunday, thrashing West Ham United at Anfield thanks to two Sadio Mane strikes and goals from Mohamed Salah and Daniel Sturridge. Supporters are starting to believe this could be their year after two consecutive 4th placed league finishes under Klopp and a Champions League final appearance last May.

Significant reinforcements arrived at Anfield this summer as the Red’s aim to knock Manchester City off their perch, in the form of Brazilian goalkeeper Alisson, Naby Keita from RB Leipzig, Swiss international Xherdan Shaqiri and Fabinho from AS Monaco.

The influx of new signings at the club has seen the bookies slash their odds to finish as champions next year, with many experts now considering Liverpool to be City’s biggest threat in their defence of the league title.

The German boss has been trying to play down such aspirations recently, however, preferring to remain as underdogs and keep improving week in week out rather than get carried away too soon. According to The Telegraph, last week he referred to the fictional movie character Rocky Balboa as an example of how he sees his team, saying: “Liverpool are like Rocky Balboa, not Ivan Drago”

As per The Liverpool Echo, in this week’s pre-match press conference he has gone for the same reference again, stating his belief that The Red’s cannot afford to be complacent at Selhurst Park against Crystal Palace on Monday.

“To stick with Rocky, sometimes he went down but in the end he won! We need to be ready for all the things that can happen in a game.”

In the first half of Liverpool’s 2017-18 season, the team struggled to pick up wins against the bottom half sides, which ultimately cost them in the long run in terms of mounting a genuine title bid. Supporters will hope that Klopp’s humility signals that times have changed this time around and that the team is ready to grind out important victories away from home on a consistent basis.