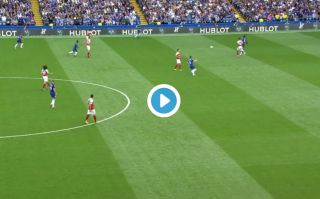 Alvaro Morata scored his first home goal in what seems like forever today, as the Spaniard bagged a great solo goal to put Chelsea 2-0 up against Arsenal at Stamford Bridge.

The former Real Madrid man notched up his first goal of the season against the Gunners to continue the Blues’ perfect start to the match.

Morata had it all to do after being put through by Cesar Azpilicueta, and the forward did superbly as he turned Shkodran Mustafi inside and out before calmly slotting past Petr Cech.

Here’s a clip of Morata’s strike. Maybe that number 9 shirt really was cursed?

Its 2 up for Chelsea

We've seen that one before…?