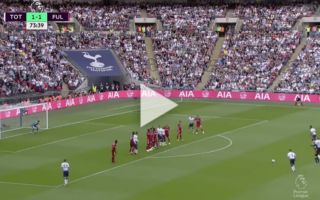 Kieran Trippier scored a superb long-range free-kick against Fulham this afternoon to give Spurs the lead against London rivals Fulham at Wembley.

The right-back, who was absolutely fantastic for England at the World Cup this summer, bagged a fine set-pieces strike for the Lilywhites to regain the lead for his side against Fulham.

This should be a familiar sight for both England and Spurs fans, as the defender did exactly the same for the Three Lions against Croatia at the World Cup this summer.

Here’s a clip of Trippier’s goal. An absolutely superb strike to say the least!

Kieran Trippier curls the free-kick in to put Tottenham Hotspur back ahead in his first Premier League start for Spurs this season.

Trippier makes it 2-1 to Spurs pic.twitter.com/L9v2KqGIcm