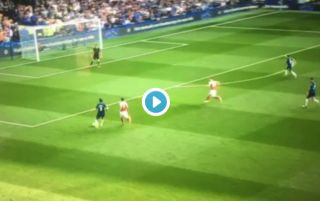 Pedro applied the finish to a fantastically-worked team goal this evening, as the Spaniard put the Blues 1-0 up against rivals Arsenal at Stamford Bridge.

The goal, which was scored after just 8 minutes, came after some very neat build-up from the home side, which saw Jorginho put Marcos Alonso through, who squared the ball to Pedro who finished well.

MORE: ‘I am sure Eden will be with us this season’ – Sarri believes that Hazard will stay despite Madrid speculation

Chelsea fans will surely be delighted with this, as their side look to continue their great run against the Gunners at Stamford Bridge this evening.

Here’s a clip of Pedro’s goal. Sarri-ball looks to be taking shape already!

Too easy for Chelsea against Arsenal as Pedro slides it home first time from an Alonso square ball pic.twitter.com/dLXvMe5hgw