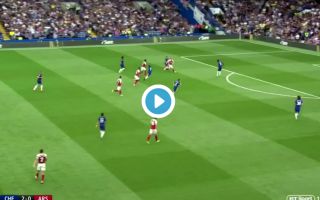 A quick-fire double from Alex Iwobi and Henrikh Mkhitaryan drew Arsenal level just before the break in their very entertaining clash against Chelsea at Stamford Bridge.

Firstly, Mkhitaryan clawed one back for the away side with a fine left-footed strike that gave Kepa in the Chelsea goal no chance.

Then, just minutes later, a ball in from Mkhitaryan allowed Alex Iwobi to slam the ball home to make the scoreline 2-2.

Chelsea fans will surely be fuming with this, as their side were just a few minutes away from going into half time with a secure 2-0 lead.

Here’s the clips of both the goals. Absolute self-destruction from the Blues…

A lethargic celebration from Alex Iwobi as he bangs one in the onion bag to draw Arsenal level against Chelsea. pic.twitter.com/94wpXkJwCe

Mkhitaryan and Aubameyang make amends for terrible misses earlier to pull one back for the Gunners. Chelsea Vs Arsenal. pic.twitter.com/cwUJZmEoyn